ISME, the Irish SME Association today (March 14th) highlights the significance of two recently published reports. They mirror our members’ concerns, and merit the attention from the Irish business community and financial media. The OECD 2018 Economic Survey of Ireland, and the EU Commission’s Semester Report 2018 contain a significant amount of objective, robust external analysis of Ireland’s current macro-economic problems, and suggest where we should be directing our collective national effort in the future.

Tackling these issues is not the sole preserve of any one Government Department, it requires a whole-of-government response. ISME highlights the following areas of importance, which pertain not just to the SME sector, but to the 930,000 persons employed in it:

Ireland’s tax base is too narrow, and the taxation system requires reform. Marginal tax rates on people with relatively low income are high. Corporation tax is being misused by the MNC sector as part of aggressive international tax planning (which has also been commented upon in analysis by the FT.) A narrowing of the tax base by the late 2000’s was one of the reasons for Ireland’s fiscal collapse in 2008. Back then, we were taking too much money in property-related transactional taxes. Now the problem is that income tax and corporation tax make up too great a proportion of our tax take, and for both taxes, they originate from too narrow a base of individuals and firms.

The Knowledge Development Box, and the Key Employee Engagement Program (KEEP) have been recent innovations for Irish business. However there are indications that some of the conditions attached to them are too complex for SMEs to use.

Most Irish firms have experienced declining productivity over the past decade. This has largely reflected the poor performance of local firms, with the large productivity gap between foreign-owned and local enterprises having widened (Figure 1). The resilience of the Irish economy hinges on unblocking the productivity potential of these local businesses. This can be achieved by further improving the enabling environment for them to succeed and grow. 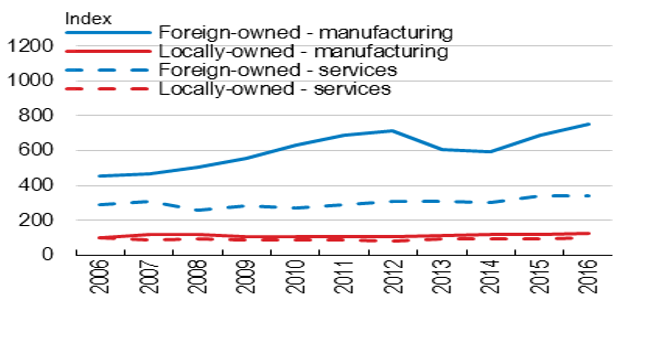 Closing this productivity gap will require concentrated effort, education, and resource expenditure in the SME sector over the decades to come.

National competitiveness is an issue, especially as sterling declines against the Euro. While the external competitiveness of the Irish economy remains high, the depreciation of sterling and recently, the US dollar against the euro, is taking its toll on Irish competitiveness. We pay too much for transport, property, insurance, legal services, energy, and poor public services in this country. But productivity is the main driver of competitiveness in the long-run. The Government needs to take the output of the National Competitiveness Council most seriously, and adopt as national strategy policies which will ensure we remain competitive, even as externalities such as foreign exchange vary.

There is a large, and persistent, difference between our National Income (GNI*) and our Gross Domestic Product (GDP). While the latter measurement is most frequently used by the World Bank, OECD, IMF and EU, that is because in most countries, there is little difference between the figures. That is not the case for Ireland, where the difference is a consistent 31%.

GNI*, not GDP, is the essential measurement of domestic wealth, national borrowing ability, and ability to repay. We should NOT use GDP as the benchmark for current or capital expenditure, since it exaggerates our ability to repay debt. Ireland’s burden of debt (especially in proportion to GNI*) remains high, and leaves Ireland vulnerable to external shocks. 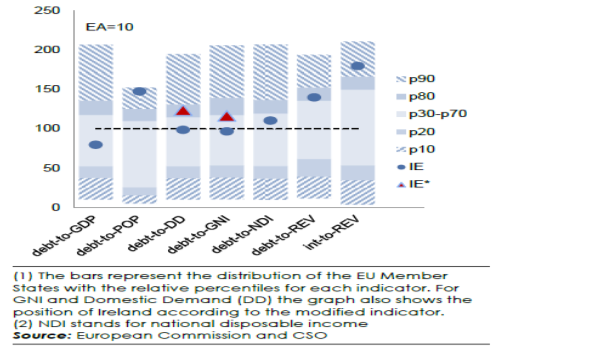 Capital expenditure is set to reach 2.5% of GDP by 2021, which equates to roughly 3.3% of GNI*. ISME believes we should trend towards 4% of GNI* over time, and that we remain too focussed on current account expenditure.

Healthcare, pensions, and homelessness are significant challenges for Ireland. The cost of accommodation is a significant drag on the wealth of our working population. Healthcare, while free to some on a means-tested basis, is a poorly provided, inefficient service. Those who can afford to, self-insure. Our population is young, but aging. Our expenditure is especially high considering the (current) relative youth of our population. The comparison against other European countries below shows Ireland in eight place in Europe in expenditure as a percentage of GDP at 9.9%. However, corrected for GNI*, this equates to a health spend of 13% of national income, the highest in Europe. 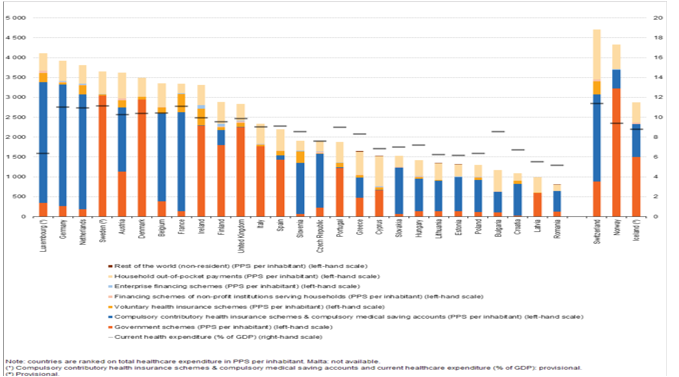 In short, more money is not the solution to our short-comings in health. Our health spend is not being managed as efficiently as it is among our European neighbours. We should not spend any more until this is remedied. Structural reform of our healthcare system is required now. It should not be sued as a political football, and it needs cross-party political will and support.

Our state pensions are paid on a ‘pay as you go’ basis, but without radial reform, are not sustainable into the future. Our unfunded public pension’s deficit is twice the size of our national debt.

Access to credit remains an issue for SMEs, and where available, it is at a significant premium to the cost of credit in peer economies. Lending to SMEs is improving slightly, but remains challenged as they continue to deleverage. Our members suggest that access to working capital remains an issue. Heightened external uncertainty also a factor. Debt overhang, market concentration among the pillar banks, and heightened uncertainty in some exporting sectors weigh on the demand for SME credit. Approximately one in five SME loans is in default according to the Central Bank (2017). Recent surveys indicate some hesitation when it comes to investment decisions of exporters to the UK, as export volumes and especially margins have already decreased due to the devaluation of sterling (DBEI 2017). When borrowing, Irish companies remain mostly reliant on internal funds (working capital) and on banks. Close to 75 % of their investment is financed using own funds, above the EU average of 60 %. Irish banks more often require collateral for large or longer maturity loans, as well as for riskier borrowers. ISME has also reported on repugnant bank practices such as the demand for signed, undated letters of resignation from business directors as loan collateral.

There are large discrepancies of labour market outcomes across skills groups, and there are barriers to the employment of some groups of low-skilled individuals (Figure 4). There are skill shortages in ICT, engineering, science, business and finance, healthcare and construction sectors (SOLAS, 2016) as well as a lack of digital skills in the general population, which in light of skills shortages is particularly worrying for those on the labour market. 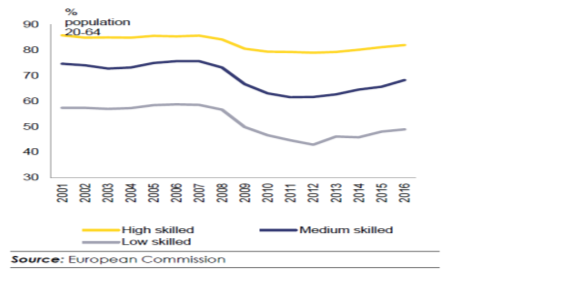 Barriers in the market for legal services continue to represent a challenge. They affect mostly small businesses as they hamper competition and increase litigation costs. The troika-recommended changes to our legal services have not taken place, and the failure to implement them has resulted in a significant rent imposition on the SME sector by the legal profession. We continue to suffer an insurance burden and litigation costs which are international outliers. Government must confront vested interests in order to tackle this.

Finally, Ireland needs to better target government expenditure, by prioritising public investment in transport, water services, and innovation in particular in support of SMEs. We must enhance social infrastructure such as social housing and childcare; increase employment prospects of low-skilled people; address low work intensity of households; improve water distribution and waste water treatment; and improve access to high quality broadband. 16% of SMEs reported that the speed of their Internet connection is insufficient. A number of SME stakeholders consider unavailability of connections of at least 100 Mbps a challenge, hampering growth and cross-border sales.